For the second time in less than eight hours, nothing was ever certain for the Jersey Hitmen 18U team until the final buzzer sounded.

After starting the day with a razor-thin 4-2 victory against the CP Dynamo to make the championship game, the Hitmen again found themselves down to the wire late against the Skipjacks Hockey Club. In the end, despite a tough, defensive battle, they pulled out the 2-0 win for the 2019-20 USPHL 18U championship.

It wasn’t until the 8:07 mark of the third period that good fortune shone on the Hitmen in the form of a 5-on-3 power play that was set to last a maximum of 1:20. They only needed 48 seconds of that to finally break the ice in one tightroped tug-of-war, when Aiden Grieco caught a circle-to-circle pass to Aiden Grieco and slapped it home from in tight.

“We were moving the puck pretty well,” recalled Grieco. “We got some shots on net there, Sean [Vlasich] found me cross-ice, and all I had to do was put it on net and luckily it went in.”

That stood up as the winner, and one of just two goals, the other an empty-net goal by Oscar Worob, assisted by Connor Sedlak.

“We worked all year to get to this point. It feels good that it paid off,” said Grieco.

“It’s a great feeling, obviously,” added goaltender John Werber. “The Skipjacks gave us a great game. We’ve been working for it all year, and we knew we could do this. I’m just really happy.”

Werber sealed up a shutout victory in net with 40 saves, just barely outdueling the Skipjacks’ Hunter Thomas who stopped 40 of 41.

“I felt like [the Skipjacks] were trying to throw a lot of point shots at the net with traffic in front,” added Werber. “What I had to do was find the relief from up top, and control those rebounds. They tried to do dump-and-chase a lot, so it was my job to stop the pucks for the defensemen, and they moved it quickly out.”

More than once, the Skipjacks descended on Werber’s net while shorthanded, so Sunday evening was no walk in the park for the Jersey Hitmen.

“This was a complete team effort, against an unbelievably well-coached Skipjacks team,” said Head Coach Anthony Yelovich. “Jason Kersner does an unbelievable job. He pushed our team to be better throughout the year. For our guys, we just battled as hard as we possibly can. We got a power play goal in the third and played some desperation defense that was necessary for the win.”

Again, that win was not in their hands until that buzzer counted down to zeroes and it was party time. For the previous three years, the South Kent Selects Academy had faced the Hitmen in the 18U final and come away victorious.

Finally, Sunday, Feb. 23, was the Hitmen’s day and they were certainly not letting one moment go.

“We preached about becoming men all year, and how close we are as a family,” said Head Coach Anthony Yelovich. “There’s a lot of love in that locker room. I told them how proud as a staff we are, really how happy we are for them. They did all the work. We [as coaches] were just along for the ride. This was one of the goals and we accomplished it.”

Werber and Grieco both talked about the winning culture the Hitmen have built over the years.

“It’s great. We have a brotherhood at the HItmen organization. It starts with the NCDC team, and that shows when the NCDC and 18U are in first place,” added Grieco. “It starts with a top guy like Jimmy Hunt. It’s great, I love it.”

“It’s great for the organization. Hopefully a bunch more kids come play for the Hitmen,” Werber added. “I’m ovioulsy happy to be part of this organization.”

Congratulations to the 2019-20 USPHL 18U Champion Jersey Hitmen! 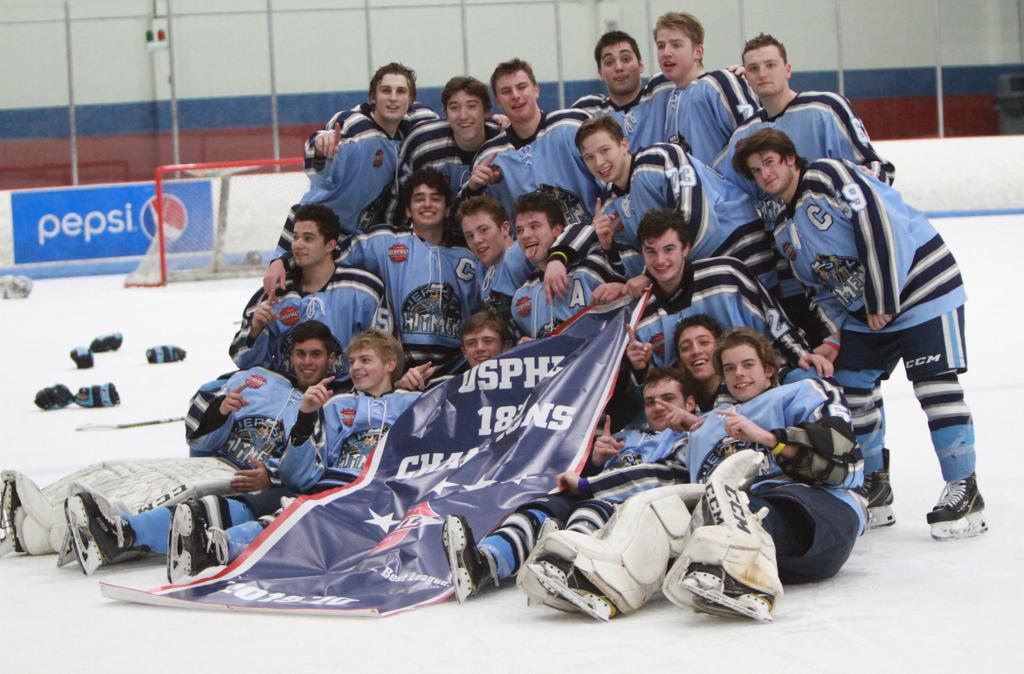