This story originally appeared on USPHL.com.

This week, that dream came true, as the Jersey Hitmen goalie committed to the U.S. Military Academy, and will suit up next year for the Army Black Knights of the Atlantic Hockey Association.

One need only look at the NCAA level or even the NHL to see the effect that the USPHL’s Jersey Hitmen have had on some of the most accomplished careers. He had not gotten the opportunity to prove himself in another Tier-2 league, so he went to the Tier-2 National Collegiate Development Conference, where 100 percent of the focus is on player development.

“The Hitmen are an organization that pushes you to be the best day in and day out,” said Abric. “There are no shortcuts, no free passes when you’re playing with the Hitmen. [Former Princeton goalie coach] George Bosak is at practice twice a week, and he helps me tweak my game and it’s huge. [Coaches] Toby Harris and Jim Hunt know all the ins and outs of the game, and they helped me with my decision process.”

The Hitmen and the Army Black Knights coaching staff know each other well - two of Head Coach Brian Riley’s sons are former Hitmen themselves! Jack was Captain for the 2012-13 Dineen Cup Champion, where he played alongside his brother Brendan. Brendan also played in the 2011-12 season.

“We have a long-standing relationship with the U.S. Military Academy and the Riley family,” said Coach Harris.

The decision process for Abric did not take long, as he started having serious discussions with the Black Knights in late January, not long after Abric put up a strong performance in the 2020 NCDC All-Star Game at Merrimack College.

“They called me after practice one day about four weeks ago, and I didn’t really know much about the Academy at that time,” said Abric. “I went up for a visit two weeks ago and fell in love with the place. I thought it was a great fit for me personally and I love what they have to offer.

“I think it’s a great opportunity for me to succeed, academically, and also to continue my hockey career,” said Abric. “I feel there’s a lot of commitment and focus on building a team as one, working together and trying to push everyone. Every player is going into that locker room looking to play pro hockey.”

“[Associate Head Coach] McKelvie made the call, and we were able to get Gavin up to West Point that weekend,” said Coach Harris. “That’s one of the beauties of playing in the NCDC: the proximity to 4 major NCAA Division 1 conferences.”

Being one of the five U.S. Military Service Academies, the college commonly known simply by its New York locale - West Point - does carry with it a commitment to serve in some capacity in the U.S. Army.

“Within that service commitment, there are 17 different branches in which you can serve, and you don’t have to decide on that until going into your senior year,” said Abric. “I have a lot of different options. I haven’t decided on a course of study yet, you don’t have to decide until going into your second year. Everyone takes the same classes in the first year, so I can take my time and decide on a concentration.”

His mental concentration has been indelible in the crease for the Hitmen. Abric is first in goals against average (1.97), he is tied for first in shutouts (three) and he is third in the NCDC for save percentage (.930).

“I think I’m a very calm goaltender who plays big and challenges shooters,” said Abric, commenting on the type of goalie Army is getting next year. “I like to play the puck as well and make it easy on defensemen.”

“Gavin is a fine young man with a great work ethic and strong character. As a goaltender, he’s everything you could ask for - he’s big, he moves extremely well, he competes hard for every puck and controls the game,” said Harris. “West Point is getting a gem in Abric!’

The USPHL congratulations Gavin Abric, his family, the Jersey Hitmen and the U.S. Military Academy on his commitment. 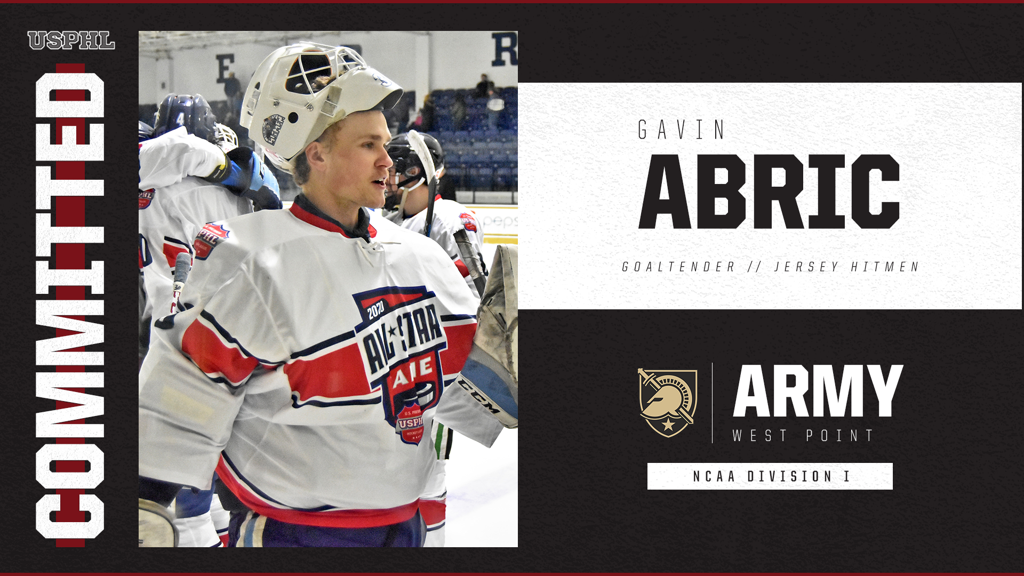