This article originally appeared at https://www.usphl.com/news_article/show/1094017

Harris led the Hitmen to a league and division-leading 42-5-1-0-4-2 record, giving them 87 points this season. Reached by e-mail recently, Harris was honored to share the honor as the best bench boss in the league.

“It is a tremendous honor,” Harris told USPHL.com. “There are so many high-level coaches in this league and the fact that it is voted on by your peers makes it that much more special.”

As he pointed out, there wasn’t anything different about how he and his staff approached this season. Their main goals are to develop players and young men teaching them the values of hard work and determination on and off the ice.

“My personal goals as a head coach are the same every year, it's all about the players,”  Harris said. “We want them to leave here bigger, stronger and faster than when they walked through these doors and give them a championship experience. I recruit players that I believe can play at the best NCAA programs in the country, but just need a little fine tuning.”

“Our staff goals are to give each NCDC athlete 30+ hours a week of training both on and off the ice to help them to their goal of playing college hockey,” said Harris. “As each of these players grow, as does the number in the win column. We want to play for the Dineen Cup every year and recruit student athletes that share that same goal.”

Now as the playoffs begin, Harris and the Hitmen are focused on parlaying that regukar season success into more titles.

“As a team we set out to defend the Founders Cup and to bring the Dineen Cup back to New Jersey. We are halfway there,” the new Co-Coach Of The Year said.

The P.A.L. Jr. Islanders were the turnaround story of 2019-20. After two seasons out of the playoffs, the Jr. Islanders moved right up the standings early on and remained high up as the team asserted its dominance from the get-go.

In the end, the team found itself in a standings points tie and lost a tiebreaker for home ice by one point in the head-to-head tiebreaker with the Islanders Hockey Club.

The NCDC coaches recognized the outstanding achievement of delivering into a playoffs a franchise that had not reached the postseason in its first two seasons in the NCDC.

“It is a great honor to receive Co-Coach Of The Year. [It is the result of] a lot of hard work from our players, staff, and organization for buying into the culture we are building,” said Marcou. “There are a lot of great coaches in the league that this award could have gone to. I am thankful to be selected among Toby Harris.”

The Jr. Islanders took a loss in Game 1 of the season, but then made an immediate about-face by earning points in eight straight games between Sept. 15 and Oct. 10.

Another seven-game point streak between Oct. 12 and Nov. 8 vaulted them further up the standings. The Jr. Islanders have picked up points against the top two teams in the league, as well, this season. They are ready to hit the ice and expect to keep their best season yet moving right along. 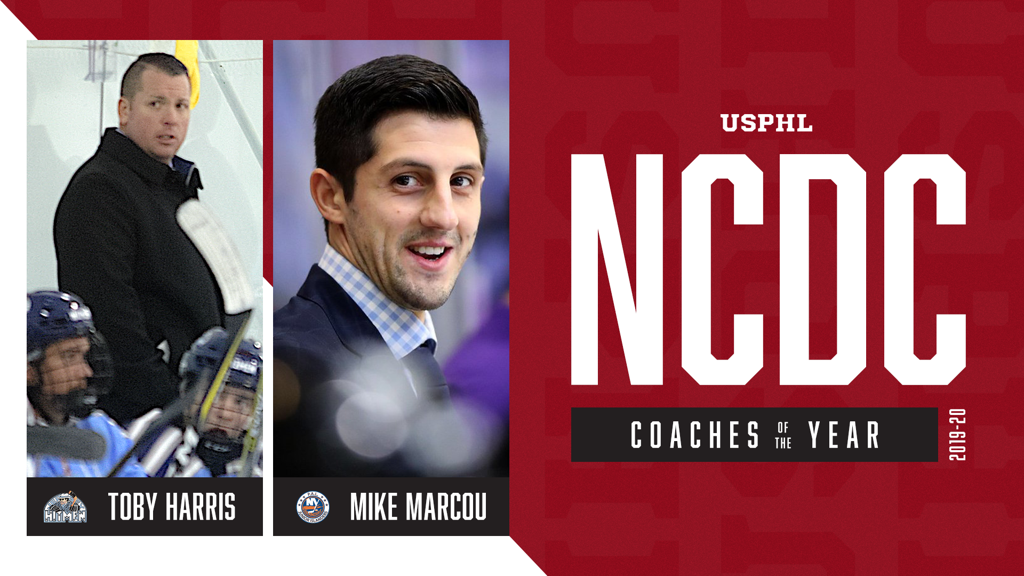