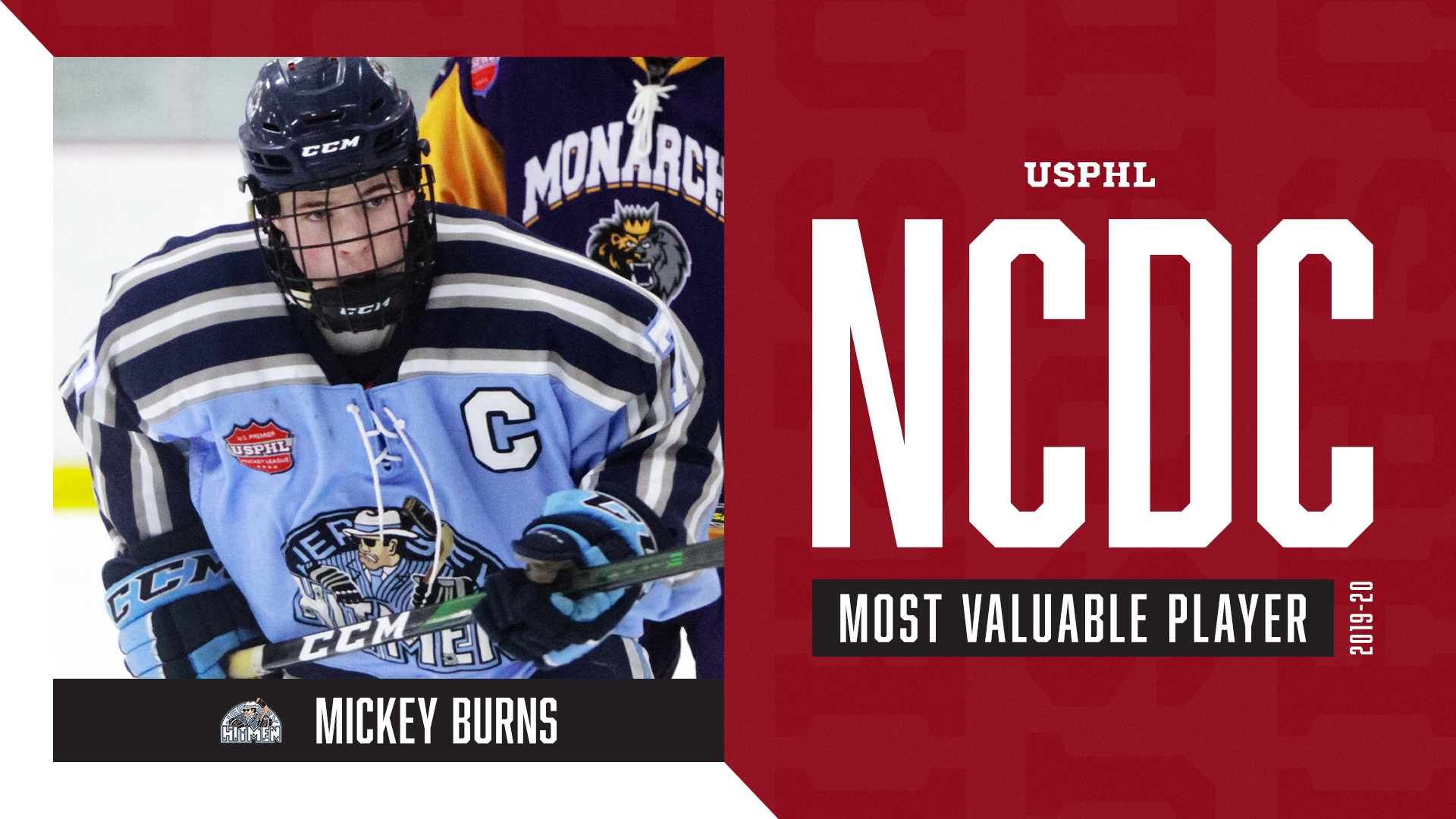 Jersey Hitmen left winger Mickey Burns has been named NCDC Most Valuable Player, after previously being named Forward Of The Year on Wednesday.

Burns was also the NCDC’s Top Scorer with 45 goals and 77 points. Burns joins his friends Jeff Losurdo and Tanner Palocsik, both currently playing for Dartmouth College, as Hitmen players to be named MVP.

“I am close friends with both Jeff Losurdo and Tanner Palocsik, both former NCDC MVP’s, so it’s cool to be able to share the same honors as those guys,” Burns told USPHL.com.

The 5-foot-9-inch, 174-pound Wayne, New Jersey native made sure to credit his teammates in helping him achieve these awards.

Hitmen head coach and 2019-20 NCDC Coach of The Year Toby Harris credited Burns’ work ethic among other valuable traits as a reason for his MVP season.

“Mickey Burns is a tireless worker and he loves the game that’s is why he is deserving of Forward Of The Year and MVP honors,” Harris told USPHL.com. “His character, work ethic, leadership, and skill set all make him the top player in the NCDC.”

Burns, 19, began his Hitmen career with the 16U squad back in the 2014-15 season. He played just one game that season and still lit the lamp in that game. He would go on to play two more seasons on the 16U team scoring 25 goals and notching 49 assists in 52 games before moving on to the 18U squad in 2017-18, the same year he saw his first three NCDC games.

Burns had 13 goals and six assists in 21 games that season and also played three games with the Hitmen NCDC team chipping in with three helpers.

His lofty credentials with the Hitmen earned him a scholarship to the University of Vermont and he will begin his Catamounts career next fall.

“I am excited to see what’s in store at the collegiate level next year, and I hope that I am able to carry some of this momentum over and make an early impact however I can,” Burns said.

Harris couldn’t be more thrilled for Burns to get the opportunity to play in the prestigious Hockey East and believes he can help UVM become a contender once again.

“We are very excited that Mickey will be playing in Hockey East next year at UVM. I believe that Mickey Burns is exactly the type of player that UVM needs to return that program to prominence,” said Harris. “His abilities to skate, create opportunities for his linemates and score goals are second to none in the NCDC. I know that his skill set will translate nicely in Hockey East.”

The USPHL congratulates Mickey Burns for his MVP and Top Scorer honors.