Werber Selected as USPHL Premier Player of the Month 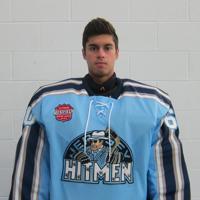 Werber (‘01/New Rochelle, N.Y.) is in his fourth year with the Hitmen and first as a Premier player after twice being a USPHL All-Star at the Midget levels. His first game with the Premier team was a doozy, taking on the always-tough Northern Cyclones, but he aced that test, stopping 45 of 48 shots to help his team win in overtime in Hub City Tampa. A couple weeks later, the Hitmen won again over the Cyclones, and this time, Werber stopped 55 of 56 shots. All told, in January, he knocked away all but 20 of the 261 shots he faced for a .923 save percentage.