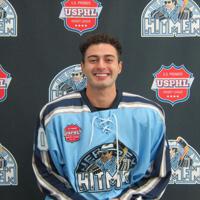 There are still miles to go, but the Jersey Hitmen have been a dominant force in the NCDC South Division.

The team always seems to be among the contenders and the rich got a little richer this season with the addition of Luke Aquaro (‘00/Yardley, Penn.) an experienced Tier-2 junior player who has fit in perfectly, racking up nine goals and 33 points through 27 games so far, ranking him among the league’s elite scorers.

For Aquaro, who recently made a commitment to attend the U.S. Military Academy (Army) at West Point, N.Y., the choice to play for the Hitmen this season was a combination of being close to home and playing under a well-respected coach.

“With what is going on in the world, I felt as if I need to be closer to home and my family,” said Aquaro in an e-mail interview. “With the Hitmen being just up the turnpike as well as being a top-notch program and organization, I felt as if this decision was a no-brainer.

“Coach [Toby] Harris played a big role in my decision, with open communications providing me with all I needed to know about the program and what they had to offer as an organization. Coach Harris and Coach [Jim] Hunt give everything they have to offer for the development and advancement of their players.”

Like so many this season, the Hitmen have had to clear a few hurdles put in front of them, including playing outdoors, but Aquaro said rather than look at it as adversity, he chooses to consider it a great opportunity.

Aquaro will begin the next chapter in his academic and hockey career when he moves on to West Point in the Fall, fulfilling a goal he set a few seasons ago.

“In my first year of juniors, I had a close friend that was committed to Army and he introduced me to the school and showed me what West Point was all about. Just like that, I was hooked. That summer, I was lucky enough to take a tour and [Army] became my dream school.

“Being able to see the academy first had, it was a place that I could see myself thriving and fitting in due to my personality and how I conduct myself. I just got that feeling and I knew West Point was the place for me. So, after a couple years of development, I received what I’ve been striving for and I’m beyond grateful for this opportunity.

Aquaro is clearly excited to attend West Point and while the Division 1 NCAA Hockey program is a big part of the excitement, academics and a chance to serve his county plays an equal part in this decision.

“I plan on heading into the economics field, maybe even psychology,” said the student. “I feel this is a chance to get a state-of-the-art education as well as the opportunity to serve our country through one of the best institutions.”

Having achieved his goal of attending West Point, Aquaro can now focus on wrapping up his junior career in style as the Hitmen are a legit championship contender this season.

“Our team and our organization do not like to lose, and we strive to be the best,” said Aquaro. “There is a lot of competition in this league and it is hard to be at the top of the totem pole, but at this season, we are determined to be the ones, lifting the trophy.”

Finally, while being Aquaro has been the one that has done the work, both in the classroom and on the ice,  to reach this goal, he is also quick to share the accomplishment with the people who have all played a part in helping him reach this target.

“I want to thank my family, teammates, coaches and all those who helped me make this dream a reality.”

The USPHL congratulates Luke Aquaro, his family, the Jersey Hitmen and the U.S. Military Academy for his commitment.