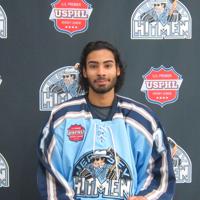 For Daniel Ebrahim, playing for the Sacred Heart University Pioneers in NCAA Division I action will be very likely and eerily similar to playing for his current NCDC team.

“They’re a very offensive team, fast, everyone shoots the puck, so my game fits their game,” said Ebrahim, who announced his commitment on Wednesday, Dec. 16. “They play very similar to the Jersey Hitmen, which is pretty cool.”

Ebrahim is in his second season with the Hitmen, with whom he has averaged 1.11 points per game within the Tier-2 National Collegiate Development Conference (NCDC). Currently, Ebrahim is the leading goal-scorer in the NCDC, with 11 through 18 contests. The 2000-born native of Brookliin, Ont., is extremely excited to be joining the Pioneers.

“They were watching me a little last year in Jersey. I believe it was a month ago that [Hitmen Head Coach] Toby Harris reached out to them, and sent game footage,” said Ebrahim. “They liked my shot release and speed. I got a virtual tour and then got the offer.

“Going into next year, I feel like I have to get really strong, and make sure my skating is ready,” he added.

Ebrahim joined the Hitmen in 2019 out of the Ontario Junior Hockey League.

“Toby recruited me two years ago, in the summer. I hadn’t played in an American junior league before. It was definitely a great experience. Last year we had a really good team, with 13 NCAA Division 1 commits. It was great playing for them,” said Ebrahim. “This year, we were looking to have a really good start. Toby has been working hard for our teams to play, and the USPHL has as well. I’m glad I made the jump.”

“Danny is one of the fastest, if not the fastest, players ever to don the Hitmen jersey and he knows how and when to use it,” said Harris. “On top of that, he has one of the best shots in the NCDC. His release is at a professional level.”

Like many Canadians, Ebrahim started skating before he started school, getting on skates at age 3.

“When going through minor hockey, I took it in stride, dealt with some adversity, but I always loved the game and played it because I enjoyed it,” said Ebrahim. “I’m fortunate enough to be here today at this point in my career.”

“After a very strong season in the NCDC last year [20 goals, 48 points] Danny had a boatload of opportunities in other leagues but he stuck with us, stuck with the NCDC and it paid off,” Harris added. “I really appreciate his loyalty and we could not be more happy for him and his family. Danny is a tireless worker. Shows up to the rink everyday with a smile on his face and is very well-liked in the Hitmen community. Sacred Heart is getting a tremendous person, excellent teammate and a deadly offensive threat.”

Ebrahim is looking forward to the next step in the 2020-21 season, when the USPHL brings the entire NCDC to Tampa, Fla., for Hub City Tampa. There, teams will play multiple games per week while living on a resort with all the expected amenities - golf courses, pools, etc. It is a revolutionary concept and will help the NCDC complete this topsy-turvy season.

“It’s technically like a little vacation going to Florida and going to a resort,” said Ebrahim. “I see my team as a second family. It’s an honor just to be with them, to build relationships and experiences, and just soaking it in and enjoying the moments we have.

“The USPHL has done an excellent job. I was surprised, when they made the decision to go to Florida,” he added. “Hats off to the league to pull this off. The USPHL seems to have a really good plan. The biggest thing is broadcasting and making sure other players get looks, and having this plan will help that happen. We’ll also face a lot of good teams, many of whom we haven’t played yet. Looking forward to playing them.”

The United States Premier Hockey League of 2020-2021 is the nation’s largest amateur ice hockey league and the only league to span the continental United States and parts of Canada. The USPHL will field approximately 550 teams representing over 100 organizations comprised of 11,000 players spanning the ages of 6 through 20.