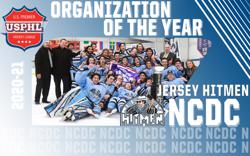 The team that has set the pace the last three regular seasons finally made good on all of this buildup when they reached the postseason, earning their first Dineen Cup Championship since 2015-16.

“I look at it as a feather in the cap for all of the auxiliary staff that a lot of times doesn’t get the credit, as well as our leadership group, who don’t get the credit they deserve for their work behind the scenes,” said Hitmen NCDC Head Coach Toby Harris. “From our strength and conditioning coach Gerry DeFilippo, power skating coach Angelo Serse, goaltending coach Jocker Reimer, front office administrator Debbie Raymond and Jess Collum, who serves as our trainer, equipment manager and yoga instructor. Every one not only makes everything go seamlessly on game day, but also keeps our planning consistent and keeps our players in tip top shape.”

Harris, whose team went 37-4-2-2 for a league-leading 78 points, as well as 4-0 in the playoffs, also points to the Jersey Hitmen and Ice Vault owner Bobby Reiss as the man who makes all of the Hitmen’s success possible.

“Bobby Reiss is arguably the best owner in the league with how he approaches the Hitmen, the structure that he puts in place, his graciousness with the number of full-time staff we have in the organization,” Harris said. “He obviously puts us in a place where we want for nothing and we need for nothing, and that has been the same for going on close to two decades.”

President and Associate Head Coach Jim Hunt is another individual who pours every ounce of his energy, heart and soul into making the Hitmen the gold standard in the NCDC as well as at many other levels across the USPHL’s vast development model.

“Jim’s attention to detail and his work ethic, the preparation and the time he puts into it is second to none in this league,” Harris said. “He is the most prepared and hardest-working coach in the league in my mind. To be able to wear two hats as President of the organization and NCDC Associate Head Coach, he is one of the main reasons we are where we are.”

Additionally, he points to Director of Player Personnel Nick Perri, whose unlimited willingness to travel anywhere to find the right players for the Hitmen as a major source of organizational success.

“As crazy as it sounds, Nick has logged about 10,000 miles and seen about 150 games this past year, even with all the shutdowns. He’s in Columbus, Ohio, one weekend, then he’s in Maine, New Hampshire, Rhode Island and he just recently came back from Pittsburgh,” added Harris.

Harris helped found the Hitmen in 2003 alongside current Boston Junior Bruins co-owner Peter Masters. He has never looked to move to any other organization, because he’ll never have as good a situation as he has found at the Ice Vault in Wayne, N.J.

“We started this whole thing from putting the first team together to designing the logo and the jerseys. It is something very near and dear to my heart, and I’m just so happy with how I’ve been treated with the Hitmen, from the facilities to ownership and the ability to do my job without them looking over my shoulder,” Harris said. “The trust we have in each other and the fact I’m able to do this job every year with the same people in the same place is just outstanding.”

Of course, he also has a lot of praise for the players who pull on the jersey and represent the Carolina and Navy Blue.

“We always have a blue print and an idea in place of where we want to go based on last year’s experience,” said Harris. “When you have guys who have been here as long as some of our guys have, they help the new players buy into the way we do things differently here, and they buy in because it works.

“We’ve had a lot of great leaders, like Alex Whelan, Mickey Burns and Liam McLinskey, the 2020-21 NCDC Player Of The Year who started young here. Mickey actually started in Learn To Skate at the Ice Vault,” said Harris. “We have a leadership group of eight players, not just the guys who wear the letter, so everyone has a voice. Our leadership group becomes an extension of myself and Jim Hunt and Bobby Reiss.”