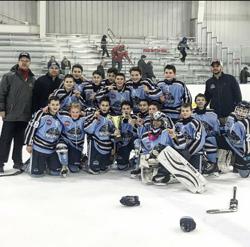 Jersey Hitmen swept the USPHL playoffs over the weekend with back to back 4-2 victories over the CT Rangers and the NJ Rockets in the finals.  Game 1 saw a tight checking game with the Hitmen taking a 1-0 lead on a Josh Shpungin tip in goal.  Brayden Guiterman followed up on a great pass from Cory Robinson with a top shelf wrist shot to give the Hitmen a 2-0 lead.  The teams then traded goals as the Rangers looked to get back into the game.  Robinson ended up scoring the game winning goal on a great shot from the right wing followed up by an empty net goal.  Hitmen win 4-2 over the Rangers to advance to the finals.

The Rockets have had the Hitmen’s number this year winning all three league games in close fashion.  The games have been fast paced and high tempo and this one was no different.  Cory Robinson got the Hitmen on the board early in the game with a laser that found the back of the net.  Soon after, Andrew Chanfrau headed up ice on a 2 on 1.  As he crossed the blue line, Chanfrau lifted a wrister over the goalies glove to give the Hitmen a 2-0 lead.  Josh Shpungin continued his hot hand by chipping home a rebound goal off a Robinson shot.  Later on, the Hitmen increased their lead to 4-0 with a nice rush and goal by Emporio Ienciu.  Two late goals for the Rockets made it close, but Noemi Martinez shut the door making 26 saves for the win.

Great weekend all around as the Hitmen win their first Pee Wee 05 Championship of the year.